The Democratic Unionist Party has warned Theresa May it will oppose any Brexit agreement that “weakens the Union” between Britain and Northern Ireland.

DUP leader Arlene Foster said a deal which places new trade barriers between Northern Ireland and Britain would fundamentally undermine the constitutional and economic integrity of the United Kingdom, which she said was “not acceptable”.

“Over time, such a deal will weaken the Union,” she said.

The party’s East Antrim MP Sammy Wilson said the deal was not one that the party could support.

Mrs May relies on the DUP’s MPs to prop up the UK’s minority government.

In a statement on Tuesday night, Mrs Foster said: “It would be democratically unacceptable for Northern Ireland trade rules to be set by Brussels. Northern Ireland would have no representation in Brussels and would be dependent on a Dublin government speaking up for our core industries.” 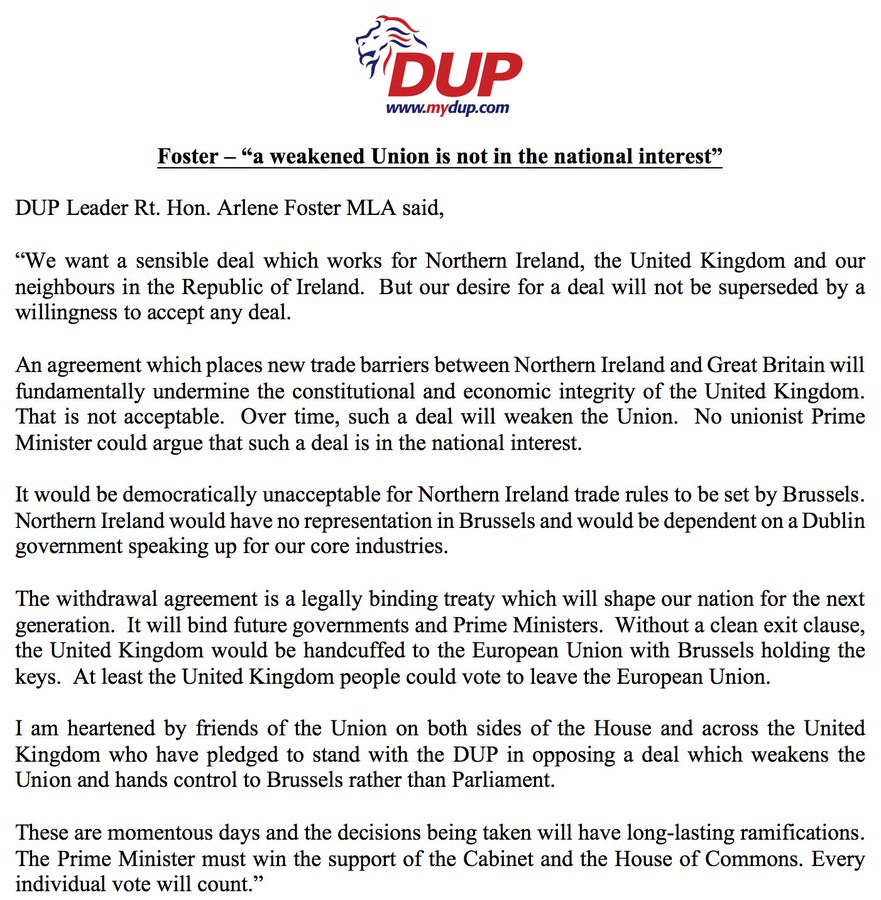 Mrs Foster added: “I am heartened by friends of the Union on both sides of the House and across the United Kingdom who have pledged to stand with the DUP in opposing a deal which weakens the Union and hands control to Brussels rather than Parliament.

“These are momentous days and the decisions being taken will have long-lasting ramifications. The Prime Minister must win the support of the Cabinet and the House of Commons. Every individual vote will count.”

Speaking on Irish broadcaster RTE, Mr Wilson said: “What we’ve heard and seen of the deal, it is something which we would absolutely oppose.”

“It goes against everything the Government promised it would deliver,” he said.

“Indeed it’s a regurgitation of what the Prime Minister said last March, no British Prime Minister could ever sign up to and it would split the United Kingdom.

“It would keep the UK tied and handcuffed to the European Union, with the key for those handcuffs remaining in the hands of the EU.”

He added: “I don’t think it’s only us who will be opposing it.”